Looks like I didn't make my annual "I still have this thing?!?" post. So here it is! 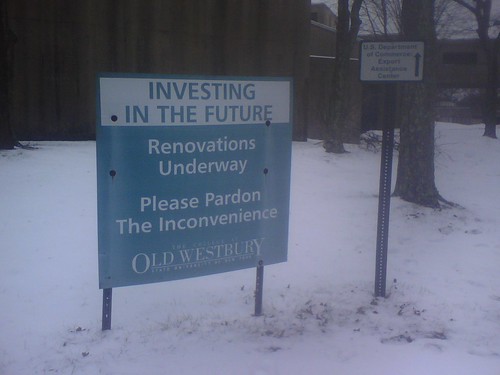 Same is it ever was, originally uploaded by Mikya. 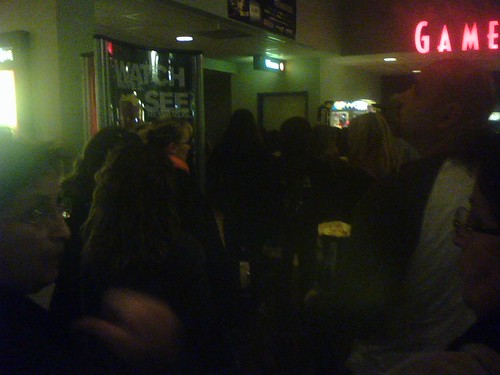 On line to get into twilight, originally uploaded by Mikya. 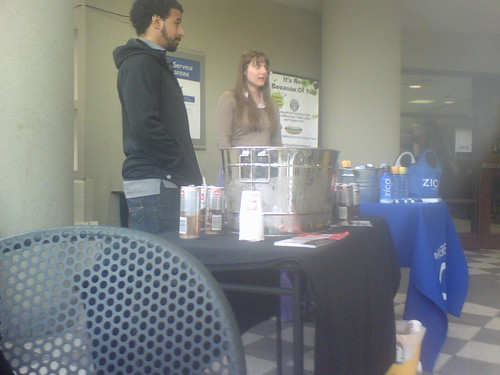 These people are hawking energy drinks at school today., originally uploaded by Mikya.

Before i took this pic the guy was talking to a student telling him what a great sports drink this product made since caffene is a natural hydrater. I can't even...

I spend so much time thinking about stuff. Thinking, not doing. Thinking about all the possibilities that could be, but never heading towards one.

I've been thinking about grad school and going for a Masters. I've been thinking that I'm not ready for it yet. I'm still so completely unfocused in heading towards a goal and so the task of settling on one, extremely specific field of study for a Masters is a task that is too daunting for me at this point in time. Just going for something random would just be a waste of time and money I don't have. After I graduate in May, I'm going to just try and get a job that I'm qualified for (hopefully within my field) and work at it and see what I learn from there and what direction it leads me in and if that is acceptable to me. Hopefully I'll be able to find a job though, I know so many people that have trouble finding any job, let alone one that actually requires their qualification and I have the mark against me that is the bad reference from my last job, but I'll worry about that one when the time comes.

Another reason I don't think I'm ready for grad school is that I just need a break from school. I've had enough of it. I'm 29 years old and I'm been going to school since I was 2, with pre-k. I had two years off before this year when I had that accounting job and one other semester back in like 2002 or something when I had my gallbladder removed (And I was registered that semester, I just had to drop all my classes halfway through the semester for medical reasons). So for 25-ish of my 29 years I've been in school and it's just getting to be too much. I want to do something else with myself. I want to be more social. I want to have friends where I can get together and do things with them. I see people on Facebook setting up various events or talking about how they're going this or that and I can't participate in the vast majority of them because I have so little free time with classes and school work and WoW, along with a lack of funds because I'm unemployed. Speaking of World of Warcraft, I think I'm nearing the end of my WoW career. I find myself playing it less and less with logging on just for the raids and little else. I enjoy the raids, but the relationships I feel with my guild mates is just so ephemeral and meaningless. Again, I want more with the people in my life.

On the subject of being social, I was invited to a post-Halloween party that was going to happen tonight at some guy's house who I'm casual acquaintances with, having only met him twice. He's sick though so the party is being moved to some person's house that I don't know. The voices in my head have been trying to talk me out of going all day and I don't really want to give into them. Since the guy who was originally going to have the party won't be there cause he's sick there's only one other person who might be there that I know. And I don't even know if she's going or not and even if she does, I'm not really friends with her either since I've only ever seen her on maybe half a dozen occasions. And if she doesn't go I'm just going to be some random guy nobody knows that shows up at a party. My self-doubts are having a field day with that one. As I said, there are all these voices in my head saying "don't go. don't go." but I keep shouting back at them. It's just my social anxiety over meeting people and having them get to know me that's getting me all worked up. I made a post a few months ago how if someone doesn't care about me or accept me then I don't really care about them. That feels like such a lie, but in another way it's not. I feel like I'm walking this fine line between wanting the acceptance of others and caring what other people think as long as it's positive but then if someone rejects me, suddenly I don't care what they think. It makes me feel like such a hypocrite when I do that, when I take some of what people say to heart and brush off the rest. But I do it anyway. And I don't see anyway to stop doing it that wouldn't result in my plunging back into depression.

-=Edit=- the moved party ended up getting canceled too so I guess I don't have to worry anymore about whether I'm going to make any new friends today :/

Feeling lousy. Lots on my mind but I don't have the energy to post it. Maybe tomorrow. But knowing me, probably not. 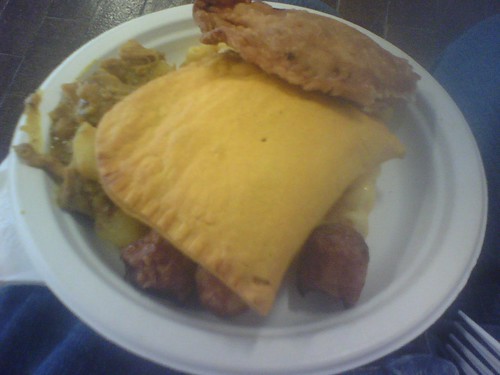 To the top of the world!, originally uploaded by Mikya.

Birthday. 29. Each one feels less significant than the last. Just another normal day. Went to school, did my readings, did some homework, slacking now with an entry. So it goes.

I've been feeling so much better in the two years since I was treated for my depression. I don't know where I'd be without treatment; I dealt with losing my job, I found the motivation to return to school and dedicate myself to it, I've tried being more open with myself.

But one thing that hasn't changed is the lack of social-ness in my life. I go out occasionally with people I know but it doesn't seem to mean anything in a larger, connective sense.

On my Facebook, a whole mess of people wished me a happy birthday. I know they mean well and I appreciate the thought, however brief, but on some level it just seems so fake. The majority of the people I've only ever had a fleeting interaction with in this life and haven't talked to in years. If, when they logged into Facebook, there wasn't a little notice on the side on their page saying "Today is Michael's Birthday, come post on his wall!" how many people would've said anything? It's funny that a social networking lends itself to me feeling no connection with this people.

But it's not Facebook's fault that I feel this lack of connection. It's not the fault of the people in my life either. It's my own fault, I've always been incapable of forming lasting bonds with people and simply freeing myself of depression did not solve that issue. I don't even know what to do about it. I'm just so unsatisfied.

On another negative note I don't know what I'll be doing for school. Next May I graduate with my B.A. and then everything is going to change. I feel like my current life is living on borrowed time. I'm broke, unemployed, going to school on loans. But after I graduate that can't continue with that. I'll just be broke and unemployed at that point with another six month clock before the loans start coming due.

That can be avoided if I go to grad school and get a Masters but I'm not confident at all in my ability to get in. I've been going to college more or less non-stop with only maybe two years total off since Fall of 2000. And the first half of that I did so terrible due to a combination of not taking it seriously and my depression rendering me incapable of fulfilling my academic responsibilities. I'm so worried that the GPA from my earlier years will drag me down and get me rejected right off from Grad school. I went to Stonybrook first for five semesters or so pulling an oh so stellar 1.0 GPA, with my last semester there being in 2005, 7 years ago by the time I graduate. Next I went to Suffolk where I pulled a 3.5 and then Old Westbury, where I did terribly the first semester I took there before taking a three semester break. I went back after I lost my job and now have a 3.5 with a 3.84 Major GPA on a 4.0 scale, after retaking most of the classes I failed my first semester at Westbury. I'm still motivated and doing fine in my current classes and if I keep it up and am able to retake the last class I failed I'll probably be over a 3.9 by the time I graduate. I can get glowing reviews from all my Professors, but I feel that that past record is going to be my downfall.

Another shot against me is I started researching grad schools this past week because I need to apply within the next few months or so for Fall 2012 and looking at schools, the only school on Long Island, public or private, who offers my desired program is Stonybrook which, if you go back one paragraph, I don't have a very good relationship with. So I may simply just be boned since I don't have the resources to travel somewhere for away for Grad school.

A third thing is I'm not even sure I really want to go to grad school. At least not right away. I'm 29 years old now and I still don't know what I want to do with myself. But I know I love learning so school seems like a good choice, but post-undergrad I need a specific direction to go in, not just take whatever. The degree I'm getting now I was just kind of pushed into it by the forces around me and while I enjoy it it wasn't really my choice, I just rolled with it. But I feel the pressure to go to continue going to school just to avoid... whatever is out there just a little longer.